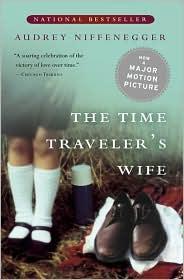 The Time Traveler's Wife is the debut novel by the American author Audrey Niffenegger, published in 2003. It is a love story about Henry, a man, with a genetic disorder that causes him to time travel unpredictably, and about Clare, his wife, an artist, who has to cope with his frequent absences and dangerous experiences of reappearing in odd places. Niffenegger, who was frustrated in love when she began the novel, wrote the story as a metaphor for her failed relationships. The tale's central relationship came to Niffenegger suddenly and subsequently supplied the novel's title. The novel, which has been classified as both science fiction and romance, examines the themes of love, loss, and free will. In particular, the novel uses time travel to explore miscommunication and distance in relationships, while also investigating deeper existential questions. The book was published by MacAdam/Cage, a small publishing firm located in San Francisco, California. The book became a bestseller after an endorsement from the author and family friend Scott Turow on The Today Show. As of March 2009, the novel has sold nearly 2.5 million copies in the United States and the United Kingdom. Many reviewers were impressed with Niffenegger's unique perspectives on time travel. Some praised her characterization of the couple, applauding their emotional depth; while others criticized her writing style as melodramatic and the plot as emotionally trite. The novel won the Exclusive Books Boeke Prize and a British Book Award. A film version starring Rachel McAdams as Clare and Eric Bana as Henry was released in August 2009.
Read more or edit on Wikipedia