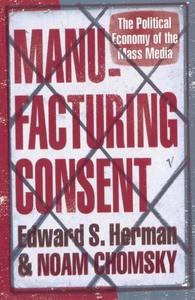 Manufacturing Consent: The Political Economy of the Mass Media is a 1988 book by Edward S. Herman and Noam Chomsky arguing that the mass communication media of the U.S. "are effective and powerful ideological institutions that carry out a system-supportive propaganda function, by reliance on market forces, internalized assumptions, and self-censorship, and without overt coercion", by means of the propaganda model of communication. The title refers to consent of the governed, and derives from the phrase "the manufacture of consent" used by Walter Lippmann in Public Opinion (1922). The book was honored with the Orwell Award. A 2002 revision takes account of developments such as the fall of the Soviet Union. A 2009 interview with the authors notes effects and impact of the internet on the propaganda model.
Read more or edit on Wikipedia