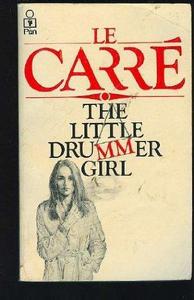 The Little Drummer Girl is a spy novel by John le Carré, published in 1983. The title suggest a word play on the Christmas carol The Little Drummer Boy. The story follows the manipulations of Martin Kurtz, an Israeli spymaster who intends to kill Khalil – a Palestinian terrorist who is bombing Jewish-related targets in Europe, particularly Germany – and Charlie, an English actress and double agent working on behalf of the Israelis.
Read more or edit on Wikipedia