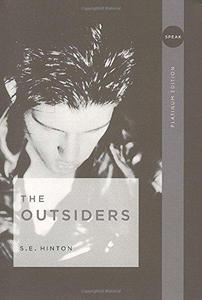 The Outsiders is a coming-of-age novel by S. E. Hinton, first published in 1967 by Viking Press. Hinton was 15 when she started writing the novel; however, she did most of the work when she was 16 and a junior in high school. Hinton was 18 when the book was published. The book details the conflict between two rival gangs divided by their socioeconomic status: the working-class "greasers" and the upper-class "Socs" (pronounced —short for Socials). The story is told in first-person perspective by teenage protagonist Ponyboy Curtis. The story in the book takes place in Tulsa, Oklahoma, in 1965, but this is never explicitly stated in the book. A film adaptation was produced in 1983, and a short-lived television series appeared in 1990, picking up where the movie left off. A stage adaptation was written by Christopher Sergel and published in 1990.
Read more or edit on Wikipedia

original title: The Outsiders
language: English
date of publication: 1967
genre: novel
followed by: That Was Then, This Is Now

was my fave novel when i was 10. i must have read it dozens of times