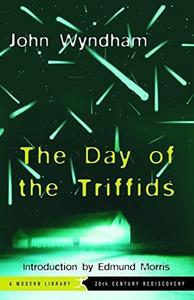 The Day of the Triffids

The Day of the Triffids is a 1951 post-apocalyptic novel by the English science fiction author John Wyndham. After most people in the world are blinded by an apparent meteor shower, an aggressive species of plant starts killing people. Although Wyndham had already published other novels using other pen name combinations drawn from his real name, this was the first novel published as "John Wyndham." The story has been made into the 1962 feature film of the same name, three radio drama series (in 1957, 1968 and 2001) and two TV series (in 1981 and 2009). It was nominated for the International Fantasy Award in 1952 and in 2003 the novel was listed on the BBC's survey The Big Read. It was the inspiration for the zombie movie 28 Days Later.
Read more or edit on Wikipedia

original title: The Day of the Triffids
language: English
date of publication: 1951
genre: science fiction novel
follows: Stowaway to Mars
followed by: The Kraken Wakes, The Night of the Triffids