Les Cités obscures (literally The Obscure Cities, but initially published in English as Cities of the Fantastic) is a graphic novel series set on a Counter-Earth, started by the Belgian comics artist François Schuiten and his friend, writer Benoît Peeters in the early 1980s. In this fictional world, humans live in independent city-states, each of which has developed a distinct civilization, each characterized by a distinctive architectural style. The full series is available in most Western European languages (in French and Dutch by Casterman, in German, Spanish, and Portuguese by local publishing houses) and other French speaking countries (in francophone Canada by Editions Flammarion). While the first five books of the series had been published in English by NBM Publishing, they discontinued publishing the series in 2008, with the editions going out of print. After a successful kickstarter campaign in mid 2013, Alaxis Press (an imprint of Atomic Vision Entertainment, Inc. and named after the "sulphuric" Obscure City of Alaxis) were able to fund a complete official English-language edition of The Leaning Girl (1996; volume 6 of the official series) and Leaning Mary (1995; spin-off picture book). The Leaning Girl is slated for release in February 2014, with The Theory of the Grain of Sand to follow in November 2015. The Leaning Girl received a 2015 Eisner Award nomination as Best U.S. Edition of International Material.Alaxis Press has also stated that they plan to release the rest of the untranslated books (including all rare spin-off materials), before going back and releasing new editions of the books previously released by NBM Publishing. In 2016, Alaxis partnered with renowned and larger comic publisher IDW Publishing to give the new English-language editions a further reach, with IDW becoming the effective new North-American publisher to the series, with the original staff of Alaxis still involved.
Read more or edit on Wikipedia 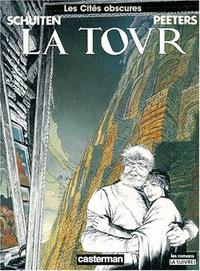