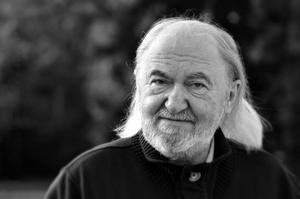 Gábor Nógrádi (born June 22, 1947, Nyíregyháza) is a Hungarian book author, screenwriter, playwright, essayist, publicist and poet who is best known for his children's novels, such as the Pigeon Granny and The Story of Pie (original title PetePite), a book which won the 2002 Children's Book of the Year award, was on the Honor List of the International Board on Books for Young People (IBBI) and was ranked among the 100 most popular books in Hungary in the 2005 'Big Book' competition. His books have become part of Hungary's national school curriculum in literature. Over the past forty years, Nogradi has become Hungary's best-selling modern children's author. His work is noted for its "realistic storytelling", humor and surprising twists. His novels are frequently themed around the fears and struggles children have to face in their formative years at difficult times, such as divorce, falling in love, fear of failure and conflicts at school or in the family. His books are published by MORA, the biggest publisher in Hungary for children literature.He is also an accomplished scriptwriter, playwright, television writer and publicist. He wrote six scripts for motion pictures, each of which made it to the big screen, including the comedy-drama We Never Die (Hungarian title: "Sose Halunk Meg"), which was selected as the Hungarian entry for the Best Foreign Language Film at the 66th Academy Awards (but was not nominated).
Read more or edit on Wikipedia