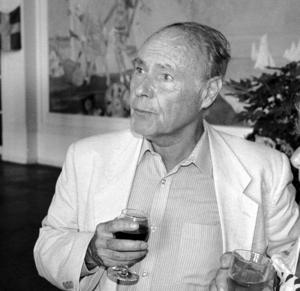 René de Obaldia (born 22 October 1918) is a French playwright and poet. He was elected to the Académie française on 24 June 1999. He grew up in Paris, studying at the Lycée Condorcet before being mobilised for the army in 1940. Taken prisoner, he was sent to Stalag VIII C (in Sagan). He was then sent to the lighter making area in Kransdyhernfurt on the 26 June 1940, then to a commando at Auras-sur-Oder to clear a forest. Even in the worst moments of this ordeal, he kept his special sense of humour. He was repatriated in 1944. He began his career in 1960, thanks to Jacques Vilar, who presented his first major play, "Génousie," at the Théâtre national populaire. This was followed by Le Satyre de la Villette, with André Barsacq at the Théâtre de l'Atelier, a comedy which ranked him with his literary forebears Jacques Audiberti, Ionesco, Beckett. He has been, for more than fifty years, one of the most-produced French playwrights on the planet, as well as the most internationally renowned (having been translated into 28 languages). Critics have admired the remarkable ease of Obaldia's style. His plays always take place within a framework of contemporary times and concern modern subjects, treating these in a comical manner. In La Génousie, for example, Obaldia replaces normal speech (in French) with Genousian, a language of fantasy, dreams, and love. In 1985 he was awarded the Grand Prix du Théâtre de l’Académie Française.
Read more or edit on Wikipedia