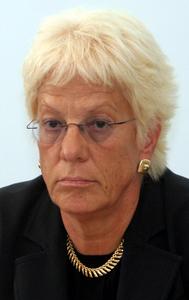 Carla Del Ponte (born February 9, 1947) is a former Chief Prosecutor of two United Nations international criminal law tribunals. A former Swiss attorney general, she was appointed prosecutor for the International Criminal Tribunal for the former Yugoslavia (ICTY) and the International Criminal Tribunal for Rwanda (ICTR) in August 1999, replacing Louise Arbour. In 2003, the U.N. Security Council removed Del Ponte as the Prosecutor for the ICTR, and replaced her there with Hassan Bubacar Jallow in an effort to expedite proceedings in that Tribunal. She remained the Prosecutor for the ICTY until 1 January 2008, when she was succeeded by Serge Brammertz. Del Ponte was formerly married, and has one son. Del Ponte served as Swiss ambassador to Argentina from 2008 to February 2011.
Read more or edit on Wikipedia

The Hunt: Me and the War Criminals