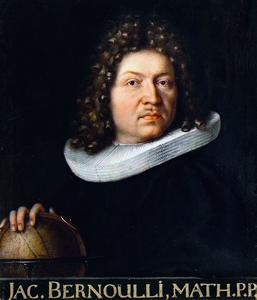 Jacob Bernoulli (also known as James or Jacques; 6 January 1655 [O.S. 27 December 1654] – 16 August 1705) was one of the many prominent mathematicians in the Bernoulli family. He was an early proponent of Leibnizian calculus and sided with Gottfried Wilhelm Leibniz during the Leibniz–Newton calculus controversy. He is known for his numerous contributions to calculus, and along with his brother Johann, was one of the founders of the calculus of variations. He also discovered the fundamental mathematical constant e. However, his most important contribution was in the field of probability, where he derived the first version of the law of large numbers in his work Ars Conjectandi.
Read more or edit on Wikipedia