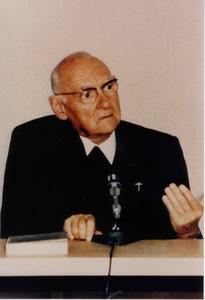 Hans Urs von Balthasar (12 August 1905 – 26 June 1988) was a Swiss theologian and Catholic priest who is considered an important Roman Catholic theologian of the twentieth century. He was appointed a cardinal by Pope John Paul II, but died shortly before the consistory. Joseph Cardinal Ratzinger said in his funeral oration for von Balthasar that "he is right in what he teaches of the faith" and that he "points the way to the sources of living water."With Ratzinger and Henri de Lubac, he founded the theological journal Communio. Over the course of his life, he authored eighty-five books, over five hundred articles and essays, and almost a hundred translations. He is known for his fifteen-volume trilogy on beauty (The Glory of the Lord), goodness (Theo-Drama), and truth (Theo-Logic).
Read more or edit on Wikipedia