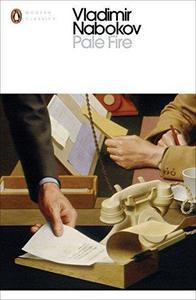 Pale Fire is a 1962 novel by Vladimir Nabokov. The novel is presented as a 999-line poem titled "Pale Fire", written by the fictional poet John Shade, with a foreword, lengthy commentary and index written by Shade's neighbor and academic colleague, Charles Kinbote. Together these elements form a narrative in which both fictional authors are central characters. Pale Fire has spawned a wide variety of interpretations and a large body of written criticism, which Finnish literary scholar Pekka Tammi estimated in 1995 as more than 80 studies. The Nabokov authority Brian Boyd has called it "Nabokov's most perfect novel", and the critic Harold Bloom called it "the surest demonstration of his own genius ... that remarkable tour de force". It was ranked 53rd on the list of the Modern Library 100 Best Novels and 1st on the American literary critic Larry McCaffery's 20th Century's Greatest Hits: 100 English-Language Books of Fiction.
Read more or edit on Wikipedia