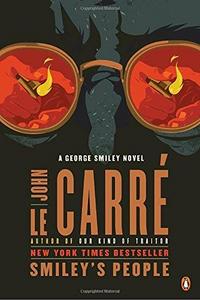 Smiley's People is a spy novel by John le Carré, published in 1979. Featuring British master-spy George Smiley, it is the third and final novel of the "Karla Trilogy", following Tinker Tailor Soldier Spy and The Honourable Schoolboy. George Smiley is called out of retirement to investigate the death of one of his old agents: a former Soviet general, the head of an Estonian émigré organisation based in London. Smiley learns the general had discovered information that will lead to a final confrontation with Smiley's nemesis, the Soviet spymaster Karla. The character General Vladimir was partly modelled on Colonel Alfons Rebane, an Estonian émigré who led the Estonian portion of SIS's Operation Jungle in the 1950s. David Cornwell (John le Carré) worked as an intelligence officer for both MI5 and the SIS (MI6).
Read more or edit on Wikipedia