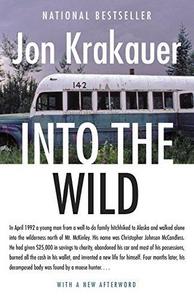 Into the Wild is a 1996 non-fiction book written by Jon Krakauer. It is an expansion of a 9,000-word article by Krakauer on Chris McCandless titled "Death of an Innocent", which appeared in the January 1993 issue of Outside. The book was adapted to a film of the same name in 2007, directed by Sean Penn with Emile Hirsch starring as McCandless. Into the Wild is an international bestseller which has been printed in 30 languages and 173 editions and formats. The book is widely used as high school and college reading curriculum. Into the Wild has been lauded by many reviewers, and in 2019 was listed by Slate as one of the 50 best nonfiction works of the past quarter-century.Despite its critical acclaim, the accuracy of the book has been disputed by some individuals involved in McCandless' story, and commentators such as Alaskan reporter Craig Medred. Medred covers a large number of items in the book that are questionable, most of which stem from the extremely limited detail in McCandless' journal. He concludes that Krakauer had to infer or invent much of McCandless' experiences. Krakauer was criticized for presenting his speculation as fact. Additionally, weather records refute some of the dramatic weather events presented in the story.
Read more or edit on Wikipedia