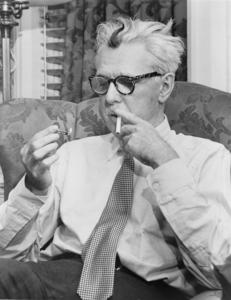 James Grover Thurber (December 8, 1894 – November 2, 1961) was an American cartoonist, author, humorist, journalist and playwright. He was best known for his cartoons and short stories, published mainly in The New Yorker and collected in his numerous books. Thurber was one of the most popular humorists of his time and celebrated the comic frustrations and eccentricities of ordinary people. His works have frequently been adapted into films, including The Male Animal (1942), The Battle of the Sexes (1959, based on Thurber's "The Catbird Seat"), and The Secret Life of Walter Mitty (adapted twice, in 1947 and in 2013).
Read more or edit on Wikipedia