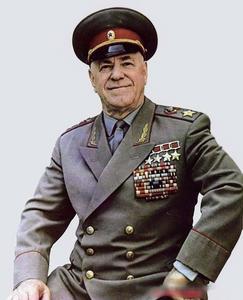 Georgy Konstantinovich Zhukov (Russian: Гео́ргий Константи́нович Жу́ков; listen ; 1 December 1896 – 18 June 1974) was a Soviet general and Marshal of the Soviet Union. He also served as Chief of the General Staff, Minister of Defence, and was a member of the Presidium of the Communist Party (later Politburo). During the Second World War, Zhukov oversaw some of the Red Army's most decisive victories. Born to a poor peasant family from central Russia, Zhukov was conscripted into the Imperial Russian Army and fought in the First World War. He served in the Red Army during the Russian Civil War. Gradually rising through the ranks, by 1939 Zhukov was given command of an army group and won a decisive battle over Japanese forces at Khalkhin Gol, for which he won the first of his four Hero of the Soviet Union awards. In February 1941, Zhukov was appointed as chief of the Red Army's General Staff. Following the German invasion of the Soviet Union, Zhukov lost his position as chief of the general staff. Subsequently, he organized the defense of Leningrad, Moscow, and Stalingrad. He participated in planning several major offensives, including the Battle of Kursk and Operation Bagration. In 1945, Zhukov commanded the 1st Belorussian Front; he took part in the Vistula–Oder Offensive and the Battle of Berlin, which resulted in the defeat of Nazi Germany, and the end of the war in Europe. In recognition of Zhukov's role in the war, he was chosen to accept the German Instrument of Surrender and inspect the Moscow Victory Parade of 1945. After the war, Zhukov's success and popularity caused Joseph Stalin to see him as a potential threat. Stalin stripped him of his positions and relegated him to military commands of little strategic significance. After Stalin's death in 1953, Zhukov supported Nikita Khrushchev's bid for Soviet leadership. In 1955, he was appointed as Defence Minister and made a member of the Presidium. In 1957 Zhukov lost favour again and was forced to retire. He never returned to a position of influence and died in 1974.
Read more or edit on Wikipedia 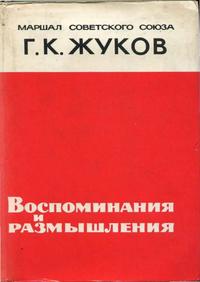