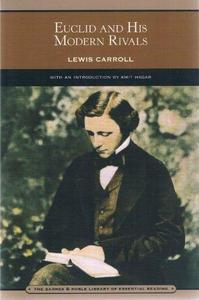 Euclid and his Modern Rivals

Euclid and His Modern Rivals is a mathematical book published in 1879 by the English mathematician Charles Lutwidge Dodgson (1832–1898), better known under his literary pseudonym "Lewis Carroll". It considers the pedagogic merit of thirteen contemporary geometry textbooks, demonstrating how each in turn is either inferior to or functionally identical to Euclid's Elements. In it Dodgson supports using Euclid's geometry textbook The Elements as the geometry textbook in schools against more modern geometry textbooks that were replacing it, advocated by the Association for the Improvement of Geometrical Teaching, satirized in the book as the "Association for the Improvement of Things in General". Euclid's ghost returns in the play to defend his book against its modern rivals and tries to demonstrate how all of them are inferior to his book. Despite its scholarly subject and content, the work takes the form of a whimsical dialogue, principally between a mathematician named Minos (taken from Minos, judge of the underworld in Greek mythology) and a "devil's advocate" named Professor Niemand (German for 'nobody') who represents the "Modern Rivals" of the title. A quote from the preface of this book was used in the first official Wikipedia logo, which was kept in use for eight months, during the course of 2001. Due to the fisheye effect, only part of the text can be read: In one respect this book is an experiment, and may chance to prove a failure: I mean that I have not thought it necessary to maintain throughout the gravity of style which scientific writers usually affect, and which has somehow come to be regarded as an ‘inseparable accident’ of scientific teaching. I never could quite see the reasonableness of this immemorial law: subjects there are, no doubt, which are in their essence too serious to admit of any lightness of treatment – but I cannot recognise Geometry as one of them. Nevertheless it will, I trust, be found that I have permitted myself a glimpse of the comic side of things only at fitting seasons, when the tired reader might well crave a moment’s breathing-space, and not on any occasion where it could endanger the continuity of the line of argument.
Read more or edit on Wikipedia