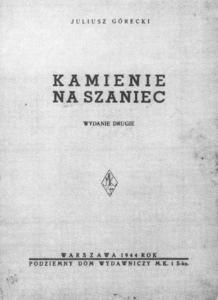 Kamienie na szaniec (lit. Stones for the Rampart, also translated as Stones on the Barricade) is a 1943 non-fiction novel by Polish writer Aleksander Kamiński. Published by the Polish underground press during the World War II occupation of Poland, the book describes the acts of sabotage and armed resistance carried out by the Polish underground scout movement, the Gray Ranks, of whom Kamiński was one of the instructors and leaders. Already immensely popular during World War II, after the war the book entered the canon of Polish literature and remains a recommended reading text for Polish students in the secondary school curriculum. It was adapted into two feature films, in 1978 and in 2014.
Read more or edit on Wikipedia