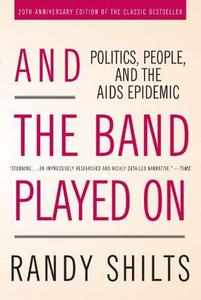 And the Band Played On

And the Band Played On: Politics, People, and the AIDS Epidemic is a 1987 book by San Francisco Chronicle journalist Randy Shilts. The book chronicles the discovery and spread of the human immunodeficiency virus (HIV) and acquired immune deficiency syndrome (AIDS) with a special emphasis on government indifference and political infighting—specifically in the United States—to what was then perceived as a specifically gay disease. Shilts's premise is that AIDS was allowed to happen: while the disease is caused by a biological agent, incompetence and apathy toward those initially affected allowed its spread to become much worse. The book is an extensive work of investigative journalism, written in the form of an encompassing time line; the events that shaped the epidemic are presented as sequential matter-of-fact summaries. Shilts describes the impact and the politics involved in battling the disease on particular individuals in the gay, medical, and political communities. Shilts begins his discussion in 1977 with the first confirmed case of AIDS, that of Grethe Rask, a Danish doctor working in Africa. He ends with the announcement by actor Rock Hudson in 1985 that he was dying of AIDS, when international attention on the disease exploded. And the Band Played On was critically acclaimed and became a best-seller. Judith Eannarino of the Library Journal called it "one of the most important books of the year", upon its release. It made Shilts both a star and a pariah for his coverage of the disease and the bitter politics in the gay community. He described his motivation to undertake the writing of the book in an interview after its release, saying, "Any good reporter could have done this story, but I think the reason I did it, and no one else did, is because I am gay. It was happening to people I cared about and loved." The book was later adapted into an HBO film of the same name in 1993. Shilts was tested for HIV while he was writing the book; he died of complications from AIDS in 1994.
Read more or edit on Wikipedia