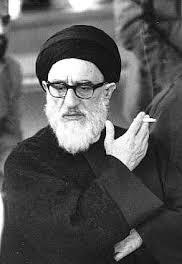 Sayyid Mahmoud Alaee Taleghani (Persian: محمود طالقانی, pronunciation , also Romanized as “Seyed Mahmūd Tāleqānī”; 5 March 1911 – 9 September 1979) was an Iranian theologian, Muslim reformer, democracy advocate and a senior Shi'a Islamic Scholar and thinker of Iran. Taleghani was a contemporary of the Iranian Revolutionary leader Ayatollah Ruhollah Khomeini and a leader in his own right of the movement against Shah Mohammad Reza Pahlavi. A founding member of the Freedom Movement of Iran, he has been described as a representative of the tendency of many "Shia clerics to blend Shia with Marxist ideals in order to compete with leftist movements for youthful supporters" during the 1960s and 1970s. His "greatest influence" has been said to have been in "his teaching of Quranic exegesis," as many later revolutionaries were his students.He was notably Tehran's first Friday Prayer Imam after the Iranian Revolution.
Read more or edit on Wikipedia