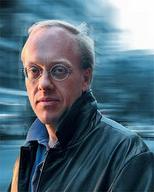 Christopher Lynn Hedges (born September 18, 1956) is an American journalist, Presbyterian minister, author, and commentator. In his early career, Hedges worked as a freelance war correspondent in Central America for The Christian Science Monitor, NPR, and Dallas Morning News. Hedges reported for The New York Times from 1990 to 2005, and served as the Times Middle East Bureau Chief and Balkan Bureau Chief during the wars in the former Yugoslavia. In 2001, Hedges contributed to The New York Times staff entry that received the 2002 Pulitzer Prize for Explanatory Reporting for the paper's coverage of global terrorism. Hedges produced a weekly column for Truthdig for 14 years until the outlet's hiatus in 2020. His books include War Is a Force That Gives Us Meaning (2002), a finalist for the National Book Critics Circle Award for Nonfiction; American Fascists: The Christian Right and the War on America (2007); Death of the Liberal Class (2010); and Days of Destruction, Days of Revolt (2012), written with cartoonist Joe Sacco. Hedges hosted the television program On Contact for RT America from 2016 to 2022. Source: Wikipedia (en)