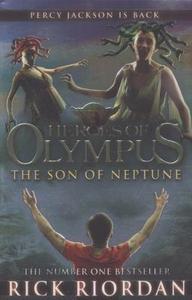 The Son of Neptune

The Son of Neptune is a 2011 fantasy-adventure novel written by American author Rick Riordan, based on Greek and Roman mythology. It is the second book in The Heroes of Olympus series, preceded by The Lost Hero and followed by The Mark of Athena. The story follows the adventures of amnesiac Percy Jackson, a demigod son of Neptune also known as Poseidon, as he meets a camp of Roman demigods and goes to Alaska with his new friends Hazel Levesque and Frank Zhang to free the Greek god of death, Thanatos, and help save the world from Gaea, the earth goddess. The novel is narrated in third-person, switching between the points of view of Percy, Frank, and Hazel. The book received mostly critical acclaim, won the Goodreads Choice Award in 2011, and appeared on several bestseller lists.The Son of Neptune was first published in hardcover on October 4, 2011 by Disney-Hyperion with a cover designed by illustrator John Rocco. After an initial hardcover printing of three million copies, the book has since been released in paperback as well as an audiobook and e-book, and has been translated into 37 languages.
Read more or edit on Wikipedia