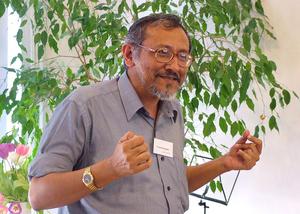 Probal Dasgupta (born 1953 in Kolkata, India) is an Indian Linguist, Esperanto speaker and activist. Dasgupta's interest in linguistics started at a very young age. He published his first article in phonology at the age of eighteen in Indian Linguistics the journal of the Linguistic Society of India His 1980 New York University PhD dissertation Questions and Relative and Complement Clauses in a Bangla Grammar is considered one of the seminal works in Bangla syntax. Apart from syntax Dasgupta has worked and written a great deal on morphology and sociolinguistics. He has developed a new approach to linguistics, called Substantivism, in partnership with Rajendra Singh, whose approach to morphology (Whole Word Morphology) forms part of the substantivist programme. Outside of formal linguistics Dasgupta has written extensively on topics in Esperanto studies, sociolinguistics and literary theory. In his many writings he has also been vocal about political and social issues. "The Otherness of English: India's Auntie Tongue Syndrome", in which he talks of the situation of English in India, has led to various debates on the social implications of the presence of English in IndiaDasgupta has been a member of the Akademio de Esperanto since 1983. He served as the vice-president of the Akademio for five terms from 2001 to 2015. In February 2016 he was elected the Akademio's president for a term of 3 years ending in 2019 and has been re-elected to serve in the same capacity for another term that ends in 2022. Earlier, Dasgupta served as the president of Universal Esperanto Association for two terms, 2007–10 and 2010–13. In 2006, he moved from the Centre for Applied Linguistics and Translation Studies (CALTS), University of Hyderabad where he had been working as a Professor of Linguistics to the Linguistic Research Unit at the Indian Statistical Institute in Kolkata where he was the head from 2008 until his retirement in 2018.
Read more or edit on Wikipedia