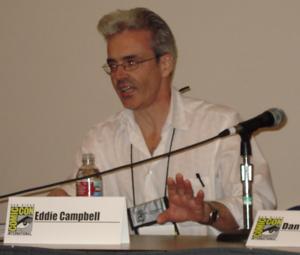 Eddie Campbell (born 10 August 1955) is a British comics artist and cartoonist who now lives in Chicago. Probably best known as the illustrator and publisher of From Hell (written by Alan Moore), Campbell is also the creator of the semi-autobiographical Alec stories collected in Alec: The Years Have Pants, and Bacchus (a.k.a. Deadface), a wry adventure series about the few Greek gods who have survived to the present day. His scratchy pen-and-ink style is influenced by the impressionists, illustrators of the age of "liberated penmanship" such as Phil May, Charles Dana Gibson, John Leech and George du Maurier, and cartoonists Milton Caniff and Frank Frazetta (particularly his Johnny Comet strip). Campbell's writing has been compared to that of Jack Kerouac and Henry Miller.Campbell has won almost every award the comics industry bestows, including the Eisner Award, the Harvey Award, the Ignatz Award, the Eagle Award, and the UK Comic Art Award.
Read more or edit on Wikipedia