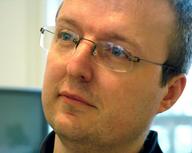 Jorge Camacho Cordón (born 18 November 1966, Zafra) is a writer in Esperanto and Spanish. Camacho was born in Zafra, Spain and learned Esperanto in 1980. He was a member of the Academy of Esperanto from 1992 until 2001. Since 1995 he has worked in Brussels as an interpreter for the European Union from English and Finnish into Spanish. Camacho was elected to the Academy of Esperanto in 1992, but on 15 August 2001 he announced his resignation due to disappointment with the Esperanto movement. However, he remains active in Esperanto and continues to review literary works. Source: Wikipedia (en)