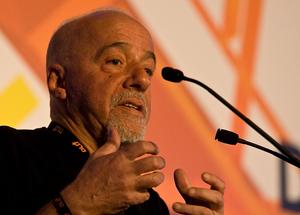 Paulo Coelho de Souza (, Portuguese: [ˈpawlu kuˈeʎu]; born 24 August 1947) is a Brazilian lyricist and novelist. He is a member of the Brazilian Academy of Letters. His novel The Alchemist has sold more than 150 million copies worldwide and is the all-time best-selling book by a Brazilian writer. He influenced Brazilian rock music through his partnership with the musician Raul Seixas.
Read more or edit on Wikipedia