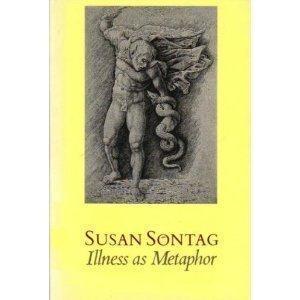 Illness as Metaphor is a 1978 work of critical theory by Susan Sontag, in which she challenged the victim-blaming in the language that is often used to describe diseases and the people affected by them. Teasing out the similarities between public perspectives on cancer (the paradigmatic disease of the 20th century before the appearance of AIDS), and tuberculosis (the symbolic illness of the 19th century), Sontag showed that both diseases were popularly associated with personal psychological traits. In particular, she said that the metaphors and terms used to describe both syndromes lead to an association between repressed passion and the physical disease itself. She wrote about the peculiar reversal that "With the modern diseases (once TB, now cancer), the romantic idea that the disease expresses the character is invariably extended to assert that the character causes the disease—because it has not expressed itself. Passion moves inward, striking and blighting the deepest cellular recesses." Sontag said that the clearest and most truthful way of thinking about diseases is without recourse to metaphor. She believed that wrapping disease in metaphors discouraged, silenced, and shamed patients. Some other writers have disagreed with her, saying that metaphors and other symbolic language help some affected people form meaning out of their experiences.
Read more or edit on Wikipedia