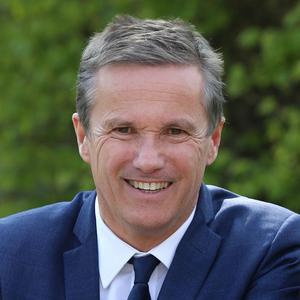 Nicolas Dupont-Aignan (French: [ni.kɔ.la dy.pɔ̃.ɛɲ.ɑ̃]; born 7 March 1961), sometimes referred to by his initials NDA, is a French politician serving since 2008 as President of minor party Debout la France. He is its only member of the National Assembly, elected for Essonne's 8th constituency since 1997, and was previously Mayor of Yerres from 1995 to 2017. A member of the Union for a Popular Movement (UMP) party until January 2007, he then founded the Gaullist and souverainist party Debout la France (DLF; "France Arise") in November 2008, named Debout la République until October 2014 and which is closely linked to the European political party Europeans United for Democracy. He ran for President of France in 2012 and 2017 and endorsed the runner-up Marine Le Pen in the 2017 second round.
Read more or edit on Wikipedia