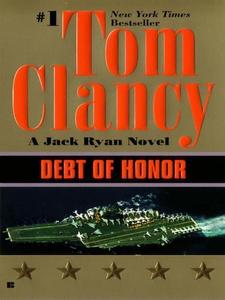 Debt of Honor is a techno-thriller novel, written by Tom Clancy and released on August 17, 1994. A direct sequel to The Sum of All Fears (1991), Jack Ryan becomes the National Security Advisor when a secret cabal of Japanese industrialists seize control of their country’s government and wage war on the United States. The book debuted at number one on The New York Times bestseller list. The novel was later noted as containing plot elements which were similar to the circumstances of the September 11, 2001, terrorist attacks and the hijacking of United Airlines Flight 93.
Read more or edit on Wikipedia