Simms Taback (February 13, 1932 – December 25, 2011) was an American writer, graphic artist, and illustrator of more than 35 books. He won the 2000 Caldecott Medal for U.S. picture book illustration, recognizing Joseph Had a Little Overcoat, and was a runner-up in 1998 for There Was an Old Lady Who Swallowed a Fly.Taback graduated from the Cooper Union for the Advancement of Art and served in the United States Army. He was a designer for CBS Records and The New York Times. He was the founder and president of the Illustrators Guild (later the New York Graphic Artists Guild) and taught art at the School of Visual Arts and Syracuse University. Taback designed the first McDonald's Happy Meal box in 1977. He died in 2011 of pancreatic cancer.
Read more or edit on Wikipedia 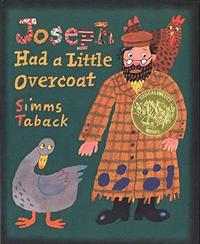 Joseph Had a Little Overcoat