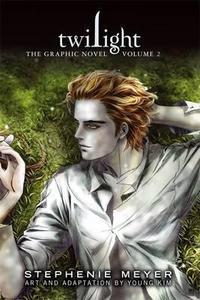 Twilight: The Graphic Novel is a 2 part comic book miniseries by Young Kim, an adaptation of the first thirteen chapters of the 2005 novel Twilight by Stephenie Meyer. Volume 2 was released on October 11, 2011. On October 2012 Volume 1 and Volume 2 were put into one book for a collectors edition that included extras in the back of the book about 5 of the characters (Carlisle Cullen, Edward Cullen, Bella Swan, Jacob Black, and Esme Cullen. On April 23, 2013 volume one of the New Moon: The Graphic Novel (the second book in the Twilight series) came out.
Read more or edit on Wikipedia