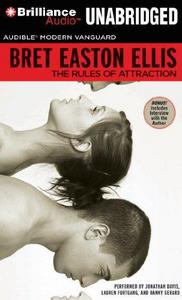 The Rules of Attraction

The Rules of Attraction is a satirical black comedy novel by Bret Easton Ellis published in 1987. The novel focuses on a handful of rowdy and often sexually promiscuous, spoiled bohemian college students at a liberal arts college in 1980s New Hampshire, primarily focusing on three of them who find themselves in a love triangle. The novel is written in first person narrative, and the story is told from the points of view of various characters. The book was adapted into a film of the same name in 2002. Ellis himself has remarked that of all the film adaptations of his books, The Rules of Attraction came closest to capturing his sensibility and recreating the world he created in his novels.
Read more or edit on Wikipedia