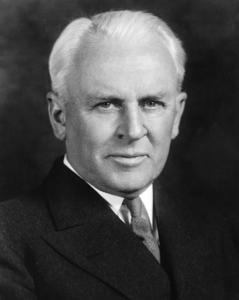 Robert Andrews Millikan (March 22, 1868 – December 19, 1953) was an American experimental physicist honored with the Nobel Prize for Physics in 1923 for the measurement of the elementary electric charge and for his work on the photoelectric effect. Millikan graduated from Oberlin College in 1891 and obtained his doctorate at Columbia University in 1895. In 1896 he became an assistant at the University of Chicago, where he became a full professor in 1910. In 1909 Millikan began a series of experiments to determine the electric charge carried by a single electron. He began by measuring the course of charged water droplets in an electric field. The results suggested that the charge on the droplets is a multiple of the elementary electric charge, but the experiment was not accurate enough to be convincing. He obtained more precise results in 1910 with his famous oil-drop experiment in which he replaced water (which tended to evaporate too quickly) with oil. In 1914 Millikan took up with similar skill the experimental verification of the equation introduced by Albert Einstein in 1905 to describe the photoelectric effect. He used this same research to obtain an accurate value of Planck’s constant. In 1921 Millikan left the University of Chicago to become director of the Norman Bridge Laboratory of Physics at the California Institute of Technology (Caltech) in Pasadena, California. There he undertook a major study of the radiation that the physicist Victor Hess had detected coming from outer space. Millikan proved that this radiation is indeed of extraterrestrial origin, and he named it "cosmic rays." As chairman of the Executive Council of Caltech (the school's governing body at the time) from 1921 until his retirement in 1945, Millikan helped to turn the school into one of the leading research institutions in the United States. He also served on the board of trustees for Science Service, now known as Society for Science & the Public, from 1921 to 1953.
Read more or edit on Wikipedia

The electron : its isolation and measurement and the determination of some of its properties / Robert A. Millikan. - 1924

The Isolation of an Ion, a Precision Measurement of its Charge, and the Correction of Stokes's Law ( 1911 )