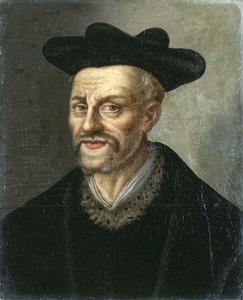 François Rabelais (UK: RAB-ə-lay, US: -⁠LAY, French: [fʁɑ̃swa ʁablɛ]; born between 1483 and 1494; died 1553) was a French Renaissance writer, physician, Renaissance humanist, monk and Greek scholar. He is primarily known as a writer of satire, of the grotesque, and of bawdy jokes and songs. Ecclesiastical and anticlerical, Christian and considered by some as a free thinker, a doctor and having the image of a "bon vivant", the multiple facets of his personality sometimes seem contradictory. Caught up in the religious and political turmoil of the Reformation, Rabelais showed himself to be both sensitive and critical towards the great questions of his time. Subsequently, the views of his life and work have evolved according to the times and currents of thought. Admirer of Erasmus, handling parody and satire, Rabelais fights for tolerance, peace, an evangelical faith and the return to the knowledge of ancient Greco-Roman, beyond the "Gothic darkness" that characterizes the Middle Ages, taking up the theses of Plato to counter the excesses of Aristotelianism. He attacks the abuses of princes and men of the Church, and opposes to them on the one hand evangelical humanist thought, and on the other hand popular culture, bawdy, "joking", marked by the taste of wine and games, thus manifesting a humble and open Christian faith, far from any ecclesiastical weight. He shared with Protestantism the criticism of scholasticism and monasticism, but the religious reformer John Calvin also attacked him in 1550. Because of his literary power and historical importance, Western literary critics consider him one of the great writers of world literature and among the creators of modern European writing. His best known work is Gargantua and Pantagruel, tales with their giant characters, heroic-comic parody, epics and novels of chivalry, but which also prefigure the realist, satirical and philosophical novel, and are considered to be one of the first forms of the modern novel. His literary legacy is such that the word Rabelaisian has been coined as a descriptive inspired by his work and life. Merriam-Webster defines the word as describing someone or something that is "marked by gross robust humor, extravagance of caricature, or bold naturalism".
Read more or edit on Wikipedia