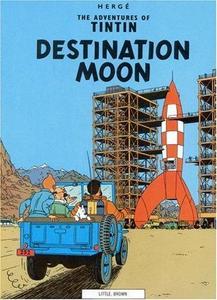 Destination Moon (French: Objectif Lune) is the sixteenth volume of The Adventures of Tintin, the comics series by Belgian cartoonist Hergé. The story was initially serialised weekly in Belgium's Tintin magazine from March to September 1950 before being published in a collected volume by Casterman in 1953. The plot tells of young reporter Tintin and his friend Captain Haddock who receive an invitation from Professor Calculus to come to Syldavia, where Calculus is working on a top-secret project in a secure government facility to plan a manned mission to the Moon. Developed in part through the suggestions of Hergé's friends Bernard Heuvelmans and Jacques Van Melkebeke, Destination Moon was produced following Hergé's extensive research into the possibility of human space travel – a feat that had yet to be achieved – with the cartoonist seeking for the work to be as realistic as possible. During the story's serialisation, Hergé established Studios Hergé, a Brussels-based team of cartoonists to aid him on the project. Hergé concluded the story arc begun in this volume with Explorers on the Moon, while the series itself became a defining part of the Franco-Belgian comics tradition. Critics have held the illustrative detail of the book in high esteem, but have expressed divided opinions of the story; some consider it to be among the most mature and emotionally resonant entries in the series, while others fault it for downplaying the humour seen in previous volumes in favour of the scientific focus of the narrative. The story was adapted for the 1957 Belvision animated series Hergé's Adventures of Tintin, the 1989 computer game Tintin on the Moon, the 1991 Ellipse/Nelvana animated series The Adventures of Tintin, and the 1992–93 BBC Radio 5 dramatisation of the Adventures.
Read more or edit on Wikipedia