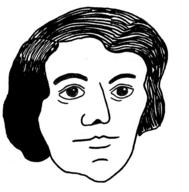 Dame Frances Amelia Yates (28 November 1899 – 29 September 1981) was an English historian of the Renaissance, who wrote books on esoteric history. After attaining an MA in French at University College London, she began to publish her research in scholarly journals and academic books, focusing on 16th-century theatre and the life of the linguist and lexicographer John Florio. In 1941, she was employed by the Warburg Institute in London, and began to work on what she termed "Warburgian history", emphasising a pan-European and inter-disciplinary approach to historiography. Her most acclaimed publication was Giordano Bruno and the Hermetic Tradition (1964), in which she emphasised the role of Hermeticism in Bruno's works and the role that magic and mysticism played in Renaissance thinking. The Art of Memory (1966), and The Rosicrucian Enlightenment (1972) are also major works. Yates wrote extensively on the occult or Neoplatonic philosophies of the Renaissance, which she is credited with making more accessible. Source: Wikipedia (en)