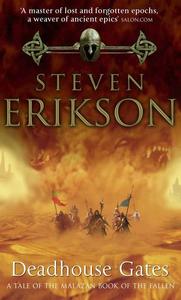 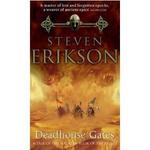 Deadhouse Gates is the second novel in Steven Erikson's epic fantasy series, the Malazan Book of the Fallen. Deadhouse Gates follows on from the first novel, Gardens of the Moon and takes place simultaneously with events in the third novel Memories of Ice. The novel was first published in the United Kingdom as a trade paperback on 1 September 2000, with a mass-market paperback edition followed on 1 October 2001. The first United States edition was published in hardback by Tor Books on 28 February 2005 with a mass-market paperback edition following on 7 February 2006. This is the only novel in the series where the UK and US editions share the same cover; the other US books use a different cover artist and style.
Read more or edit on Wikipedia