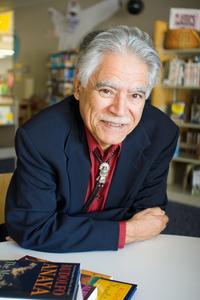 Rudolfo Anaya (October 30, 1937 – June 28, 2020) was an American author. Noted for his 1972 novel Bless Me, Ultima, Anaya was considered one of the founders of the canon of contemporary Chicano literature. The themes and cultural references of the novel, which were uncommon at the time of its publication, had a lasting impression on fellow Latino writers. It was subsequently adapted into a film and an opera.
Read more or edit on Wikipedia