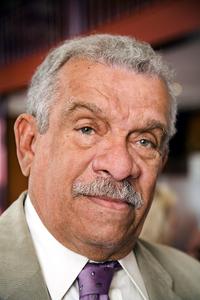 Sir Derek Alton Walcott (23 January 1930 – 17 March 2017) was a Saint Lucian poet and playwright. He received the 1992 Nobel Prize in Literature. He was the University of Alberta's first distinguished scholar in residence, where he taught undergraduate and graduate writing courses. He also served as Professor of Poetry at the University of Essex from 2010 to 2013. His works include the Homeric epic poem Omeros (1990), which many critics view "as Walcott's major achievement." In addition to winning the Nobel Prize, Walcott received many literary awards over the course of his career, including an Obie Award in 1971 for his play Dream on Monkey Mountain, a MacArthur Foundation "genius" award, a Royal Society of Literature Award, the Queen's Medal for Poetry, the inaugural OCM Bocas Prize for Caribbean Literature, the 2011 T. S. Eliot Prize for his book of poetry White Egrets and the Griffin Trust For Excellence in Poetry Lifetime Recognition Award in 2015.
Read more or edit on Wikipedia