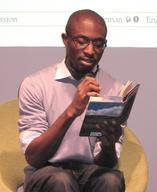 Uzodinma Iweala (listen) (born November 5) is a Nigerian-American author and medical doctor. His debut novel, Beasts of No Nation, is a formation of his thesis work (in creative writing) at Harvard. It depicts a child soldier in an unnamed African country. The book, published in 2005 and adapted as an award-winning film in 2015, was mentioned by Time Magazine, The New York Times, Entertainment Weekly, The Times, and Rolling Stone. In 2012, he released the non-fiction book Our Kind of People, about the HIV/AIDS epidemic in Nigeria. He later released a novel titled Speak No Evil, published in 2018, which highlights the life of a gay Nigerian-American boy named Niru.Iweala is currently the CEO of The Africa Center in Harlem, New York. Source: Wikipedia (en)