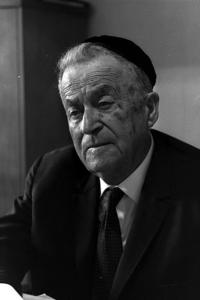 Shmuel Yosef Agnon (Hebrew: שמואל יוסף עגנון; July 17, 1888 – February 17, 1970) was one of the central figures of modern Hebrew fiction. In Hebrew, he is known by the acronym Shai Agnon (ש"י עגנון‎). In English, his works are published under the name S. Y. Agnon. Agnon was born in Polish Galicia, then part of the Austro-Hungarian Empire, and later immigrated to Mandatory Palestine, and died in Jerusalem. His works deal with the conflict between the traditional Jewish life and language and the modern world. They also attempt to recapture the fading traditions of the European shtetl (village). In a wider context, he also contributed to broadening the characteristic conception of the narrator's role in literature. Agnon had a distinctive linguistic style mixing modern and rabbinic Hebrew.In 1966, he shared the Nobel Prize in Literature with the poet Nelly Sachs.
Read more or edit on Wikipedia