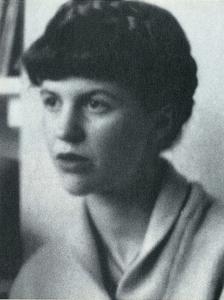 Sylvia Plath (; October 27, 1932 – February 11, 1963) was an American poet, novelist, and short-story writer. She is credited with advancing the genre of confessional poetry and is best known for two of her published collections, The Colossus and Other Poems (1960) and Ariel (1965), as well as The Bell Jar, a semi-autobiographical novel published shortly before her death in 1963. The Collected Poems were published in 1981, which included previously unpublished works. For this collection Plath was awarded a Pulitzer Prize in Poetry in 1982, making her the fourth to receive this honour posthumously.Born in Boston, Massachusetts, Plath studied at Smith College in Massachusetts and at Newnham College in Cambridge, England. She married fellow poet Ted Hughes in 1956, and they lived together in the United States and then in England. Their relationship was tumultuous and, in her letters, Plath alleges abuse at his hands. They had two children before separating in 1962. Plath was clinically depressed for most of her adult life, and was treated multiple times with electroconvulsive therapy (ECT). She killed herself in 1963.
Read more or edit on Wikipedia