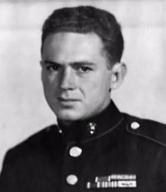 Robert Hugh Leckie (December 18, 1920 – December 24, 2001) was a United States Marine and an author of books about the military history of the United States, sports books, fiction books, autobiographies, and children's books. As a young man, he served with the 1st Marine Division during World War II; his service as a machine gunner and a scout during the war greatly influenced his work. Leckie's war memoir, Helmet for My Pillow, along with Eugene B. Sledge's book With the Old Breed, formed the basis for the HBO series The Pacific (2010), the follow-up series to Band of Brothers. In the miniseries, Leckie is portrayed by James Badge Dale. Source: Wikipedia (en)