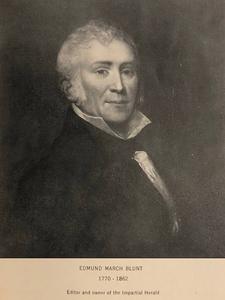 Edmund March Blunt (June 20, 1770 – January 4, 1862) was an American navigator, author, and publisher of nautical magazines. He established a nautical book and chart publishing firm that became the largest publishing firm in early 19th century. In 1796, he published American Coastal Pilot, which described every port of the United States. Blunt created a map in 1796 of what is now the Federated States of Micronesia.
Read more or edit on Wikipedia

The first book of American sailing directions published in the United States.