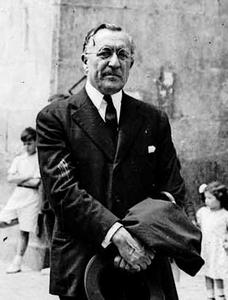 Ramiro de Maeztu y Whitney (May 4, 1875 – October 29, 1936) was a prolific Spanish essayist, journalist and publicist. His early literary work adscribes him to the Generation of '98. Adept to Nietzschean and Social Darwinist ideas in his youth, he became close to Fabian Socialism and, later, to Distributism and Social corporatism during his spell as correspondent in London, from where he chronicled the Great War. During the years of the Primo de Rivera dictatorship he served as Ambassador to Argentina. A staunch militarist, he became at the end of his ideological path one of the most prominent Far-right theorists against the Second Republic, leading the reactionary voices calling for a military coup. Member of the cultural group Acción Española, he spread the concept of "Hispanidad" (Spanishness). Imprisoned by Republican authorities after the outbreak of the Spanish Civil War, he was killed by leftist militiamen during a saca in the midst of the conflict.
Read more or edit on Wikipedia