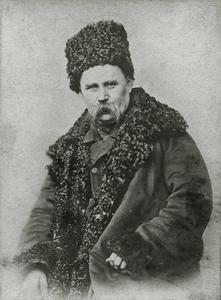 Taras Hryhorovych Shevchenko (Ukrainian: Тара́с Григо́рович Шевче́нко [tɐˈrɑz ɦrɪˈɦɔrowɪtʃ ʃeu̯ˈtʃɛnko]; 9 March [O.S. 25 February] 1814 – 10 March [O.S. 26 February] 1861), also known as Kobzar Taras, or simply Kobzar (kobzars are bards in Ukrainian culture), was a Ukrainian poet, writer, artist, public and political figure, as well as folklorist and ethnographer. His literary heritage is regarded to be the foundation of modern Ukrainian literature and, to a large extent, the modern Ukrainian language, though the language of his poems was different from the modern Ukrainian language. Shevchenko is also known for many masterpieces as a painter and an illustrator.He was a fellow of the Imperial Academy of Arts. Though he had never been the member of the Brotherhood of Saints Cyril and Methodius, in 1847 Shevchenko was politically convicted for explicitly promoting the independence of Ukraine, writing poems in the Ukrainian language, and ridiculing members of the Russian Imperial House. Contrary to the members of the society who did not understand that their activity led to the idea of the independent Ukraine, according to the secret police, he was the champion of independence.
Read more or edit on Wikipedia