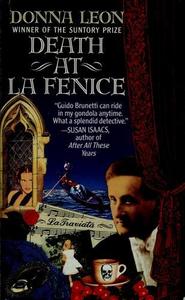 Death at La Fenice (1992), the first novel by American academic and crime-writer Donna Leon, is the first of the internationally best-selling Commissario Brunetti mystery series, set in Venice, Italy. The novel won the Japanese Suntory prize, and its sequel is Death in a Strange Country (1993).
Read more or edit on Wikipedia