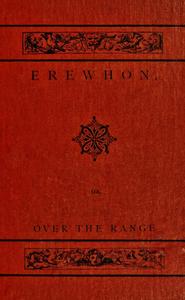 Erewhon: or, Over the Range is a novel by Samuel Butler which was first published anonymously in 1872, set in a fictional country discovered and explored by the protagonist. Butler meant the title to be understood as the word "nowhere" backwards even though the letters "h" and "w" are transposed. The book is a satire on Victorian society.The first few chapters of the novel dealing with the discovery of Erewhon are in fact based on Butler's own experiences in New Zealand, where, as a young man, he worked as a sheep farmer on Mesopotamia Station for about four years (1860–64), and explored parts of the interior of the South Island and which he wrote about in his A First Year in Canterbury Settlement (1863). The novel is one of the first to explore ideas of artificial intelligence, as influenced by Darwin's recently published On the Origin of Species (1859) and the machines developed out of the Industrial Revolution (late 18th to early 19th centuries). Specifically, it concerns itself, in the three-chapter "Book of the Machines", with the potentially dangerous ideas of machine consciousness and self-replicating machines.
Read more or edit on Wikipedia