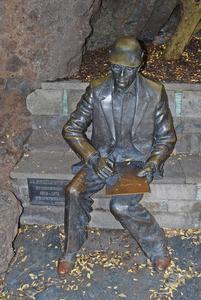 Eric (Don Ericus) Ragnor Sventenius (born Erik Ragnar Svensson; also known simply as Eric (Erich, Enrico) Ragnor) (10 October 1910 — 23 June 1973) was a Hispano-Swedish botanist. Born in the small town of Skirö, Vetlanda, he studied in various universities across Europe. In Spain, he studied at the Marimurta Botanical Garden in Blanes which had been founded in 1920 by Karl Faust. In 1931, he traveled to the Canary Islands. In 1952, he began working at the Botanical Garden of Tenerife (Jardín de Aclimatación de la Orotava). He studied and cataloged unclassified Canarian species. Sventenius proposed creating a botanical garden dedicated to Canarian flora, continuing the work begun by José de Viera y Clavijo. At Gran Canaria, he founded Jardín Botánico Canario Viera y Clavijo in 1952 at Tafira Alta, c. 7 km southwest of Las Palmas. It opened its doors to the public in 1959. He worked as the garden's director until his death in 1973 in a car accident. His grave is in the Canarian Botanical Garden "Viera y Clavijo", right next to a rock where he used to sit and meditate, relax and listen to the birds. The standard botanical author abbreviation Svent. is applied to the species he described.
Read more or edit on Wikipedia