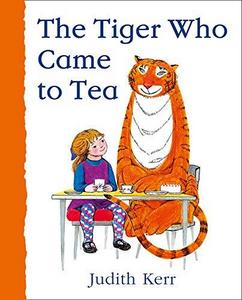 The Tiger Who Came to Tea

The Tiger Who Came to Tea is a short children's story, first published by HarperCollins in 1968, written and illustrated by Judith Kerr. The book concerns a girl called Sophie, her mother, and an anthropomorphised tiger who invites himself to their afternoon tea and consumes all the food and drink they have. The book remains extremely popular more than 50 years after it was first published, and a theatrical adaptation of the story has been produced. A television adaptation of the book aired on UK's Channel 4 on Christmas Eve 2019 at 7:30pm GMT. The original artwork for the book is held by Seven Stories, a children's literature centre in the UK.
Read more or edit on Wikipedia

original title: The Tiger Who Came to Tea
language: English
date of publication: 1968